Tôchi bellezza at the Ravenna Festival of Culture 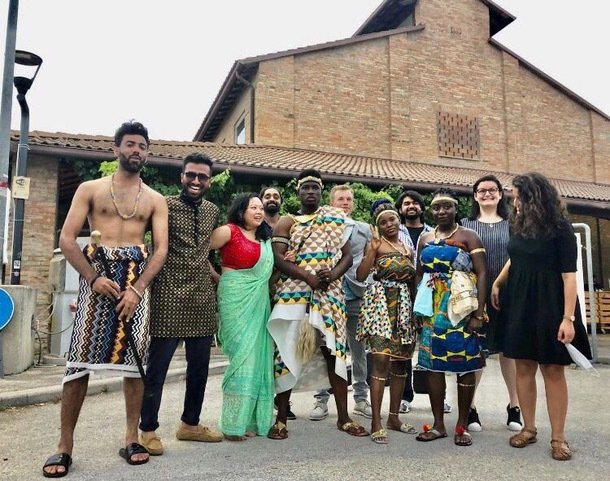 For culture to exist, and most of all to be transmitted, there must naturally exist capable people who can communicate the achievements, beliefs, and histories of humankind to any willing listener, but that’s just it-there must be someone willing to listen. Aside from the ability to actually organize individual talent into a cohesive whole, any such effort (no matter how big it might be) must also be able to create the conditions for maximum viewership. I’m reminded here of The Player in Rosencrantz and Guildenstern, who, after discovering that the audience has abandoned his troupe in the first act of their performance, declares the following: “You don't understand the humiliation of it-to be tricked out of the single assumption which makes our existence viable-that somebody is watching .... No one came forward, no one shouted at us. The silence was unbreakable, it imposed itself upon us; it was obscene.” Culture, inherently, is all about visibility, mainly because it not only survives through the act of sharing, but is also continually embellished by the interaction between different people, who are either participating in it directly or even watching it from a distance. In a sense, we can really compare these phenomena to a play; the “actors” create meaning on “stage” and the audience, afterwards, transmits what they have seen to others outside of this context-either enthusiastically because they’ve enjoyed the spectacle or coolly because they either didn’t understand what was going or were simply close-minded.

We can say, hence, that the Achilles’ heel of culture is certainly audience, because those who directly participate in its creation (at least with benevolent aims of bettering humanity) are for the most part interested in the genuine production and subsequently truthful transmission of it, while no such assumption can be made about audiences, because even their presence (while comforting and reassuring) does not always mean honesty and truth will emanate from them-again, either due to some misunderstanding in the most positive sense or racism in the most negative.

Why such a long-winded introduction to discuss the Ravenna Festival of Culture? Well, precisely for the reason that it was able to succeed on both fronts- production and viewership. One of the direct participants, Amanda Quach, a first year student of International Cooperation on Human Rights and Intercultural Heritage (the same program I graduated from recently), has already done a great deal since arriving in Ravenna. Besides founding tôchi bellezza, a theater group, she also created RightsQuake, a community-based initiative which captures different human rights stories from all over world, all in an attempt to try and understand “how human rights intersects with the everyday lives of people.”

On July 4th, the last day of the festival, Amanda’s troupe performed a well-choreographed show dealing precisely with culture, in particular themes of inclusion and exclusion; the production featured not only graduates and students from our own course, but also those of other faculties, along with people not affiliated with the university. Due to the immediate relevance of the themes, those who attended were very pleased with the spectacle. Given that Amanda is a student herself-one that concurrently with her extracurricular activities needs to meet the requirements of a demanding master’s program, her success in choreographing an amazing show, complete with colorful costumes, sophisticated dances, and corresponding music for such an event should be emphasized. Ultimately it is vibrant occasions like this, bringing together African, Asian, and European traditions, that best represents what it means to really keep culture alive and transmit it in the most truthful ways.

Indeed, it seems very strange that fanatic nationalism should be making all the headlines today, given that throughout history, years upon years of migration, contact, and interaction should have, at present, given rise to an altogether different worldview- one which understands that no culture of our time came to be what it is today independently, through isolation, by itself. The best innovations, historically and presently, happened, and will continue to happen at the literal and metaphorical borders- the places where different peoples and ideas came into contact; these borders have increasingly become zones of tension and exclusion at best, and places of real, tangible conflict at worst.

Amanda and those involved in her show did their small best to change the present discourse and this is really all we can do as humans; in this respect they were successful, and that’s why we wish them all the best in their future endeavors.

As the Romans used to say: Ad maiora semper.

David Garyan has published three chapbooks with Main Street Rag, along with a full collection, (DISS)INFORMATION, with the same publisher. He holds an MA and MFA from Cal State Long Beach, where he associated himself with the Stand Up Poets. He recently graduated with a degree in International Cooperation on Human Rights and Intercultural Heritage from the University of Bologna. He divides his time between Trento and Ravenna.