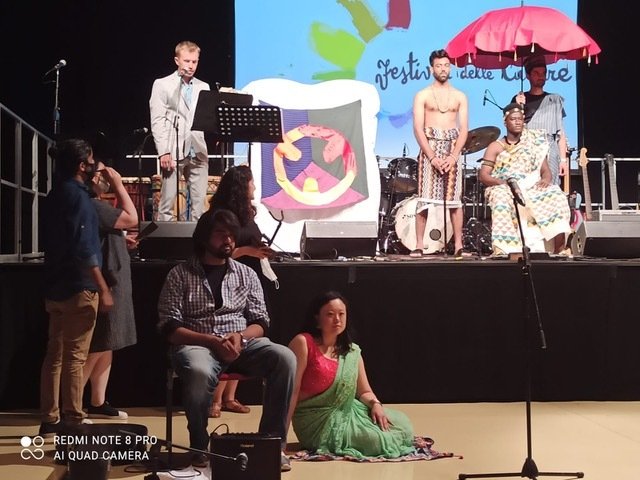 Due to the short notice of participation, it took much work and enthusiasm to be able to come out with the splendid show. The entire costumes from the king’s chair and umbrella to the dancers’ wraps were all prepared by this creative team. Finding costumes and actors were some of the challenges we went through to provide a phenomenon performance.

This show was about a group of international migrants in an island called Isola della bellezza which means beautiful Island. They were accepted by the United Nations as a 197th nation. The king from Ghana was democratically elected. After much celebration of successfully becoming a nation, there was a group of protestors who protested the requirements of having the right to citizenship. After a successful protest, the king accepted their request, and they were all given their citizenship rights. The idea of the show was to present a society of multinational togetherness and the rights of the migrants.

We must admit our show was greatly enjoyed by many people who watched us, all thanks to the organisers of Festival delle Culture for giving us the platform, and our warm appreciation goes to our organisers from the management to the script writers and the actors who made this possible. tôchi bellezza has more to offer, we welcome everyone, and we ask you to wait for more shows.